When They See Us

Korey is in adult prison and struggles with it. Eventually, the real truth comes out about what really happened. Events that had been ignored finally come to light.

The New York City police are shown mounting a conspiracy with prosecutors, to fudge timelines and to ignore conflicting evidence, in order to expedite a guilty verdict against five boys.

Five adolescents are shown in their comfortable, familiar residential neighborhood of Harlem, bantering with each other and playing restlessly.

The Best TV and Movies to Watch in May

Check out our editors' picks to get the lowdown on the movies and shows we're looking forward to this month.

2019 Watchlist: The Year's Most-Added TV Series
a list of 20 images
updated 5 months ago

2019 Emmys: Trending Titles
a list of 89 titles
updated 8 months ago

How many episodes of When They See Us have you seen?

Search for "When They See Us" on Amazon.com

"When They See Us" Shows the Horrors of Injustice 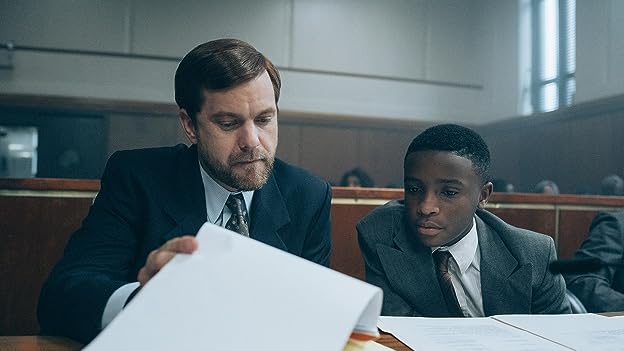 "When They See Us" star Joshua Jackson discusses why the new Netflix mini-series is so impactful, and how his character became a passionate advocate for justice.

Based on the true story of Marie, a teenager who was charged with lying about having been raped, and the two female detectives who followed the path to the truth.

A chronicled look at the criminal exploits of Colombian drug lord Pablo Escobar, as well as the many other drug kingpins who plagued the country through the years.

In April 1986, an explosion at the Chernobyl nuclear power plant in the Union of Soviet Socialist Republics becomes one of the world's worst man-made catastrophes.

Oprah Winfrey talks with the exonerated men once known as the Central Park Five, plus the cast and producers who tell their story in "When they see us"

Flashing between past and present, a fractured family confronts haunting memories of their old home and the terrifying events that drove them from it.

A Congressman works with his equally conniving wife to exact revenge on the people who betrayed him.

Various chronicles of deception, intrigue and murder in and around frozen Minnesota. Yet all of these tales mysteriously lead back one way or another to Fargo, North Dakota.

In 1989, a jogger was assaulted and raped in New York's Central Park, and five young people were subsequently charged with the crime. The quintet, labeled the Central Park Five, maintained its innocence and spent years fighting the convictions, hoping to be exonerated. This limited series spans a quarter of a century, from when the teens are first questioned about the incident in the spring of 1989, going through their exoneration in 2002 and ultimately the settlement reached with the city of New York in 2014. The cast is full of Emmy nominees and winners, including Michael Kenneth Williams, John Leguizamo, Felicity Huffman, and Blair Underwood. Oscar nominated and Emmy winner Ava DuVernay co-wrote and directed the four episodes. Written by Jwelch5742

What if all boys were created equal?

Jharrel Jerome lobbied for an audition while he was busy filming Mr. Mercedes (2017), for which he had grown a beard. With the beard, he was afraid he would be considered too old to play the younger Korey, and he fully expected that the project would cast two different actors to play the part at different ages. After finishing Mr. Mercedes, he shaved his beard and auditioned again. Ava DuVernay was so impressed by both his audition, and how much his facial hair aged him, that she cast him as Korey at both ages. See more »

This was an uncomfortable but necessary watch. I was very familiar with the case, even more so that I actually thought but to see it acted out and shot so tremendously was gut wrenching. Sadly injustice has been and will be part of life until the end of time, undoubtedly there's people fighting through it right now. I've seen quite a few negative reviews that this is just a puppet show to stomp on Trump and if that's your belief fine, but in my view facts speak for themselves and I knew about Trumps involvement in this case before this series, but there's no doubt the writer/director really wanted that message out there. Putting all politics, corruption and media aside, it's a truly harrowing, gut wrenching story about how five normal BOYS, lost their freedom, youth and innocence and how all of them including the victim never saw justice served correctly. A hard watch but a must watch.

This FAQ is empty. Add the first question.
Edit